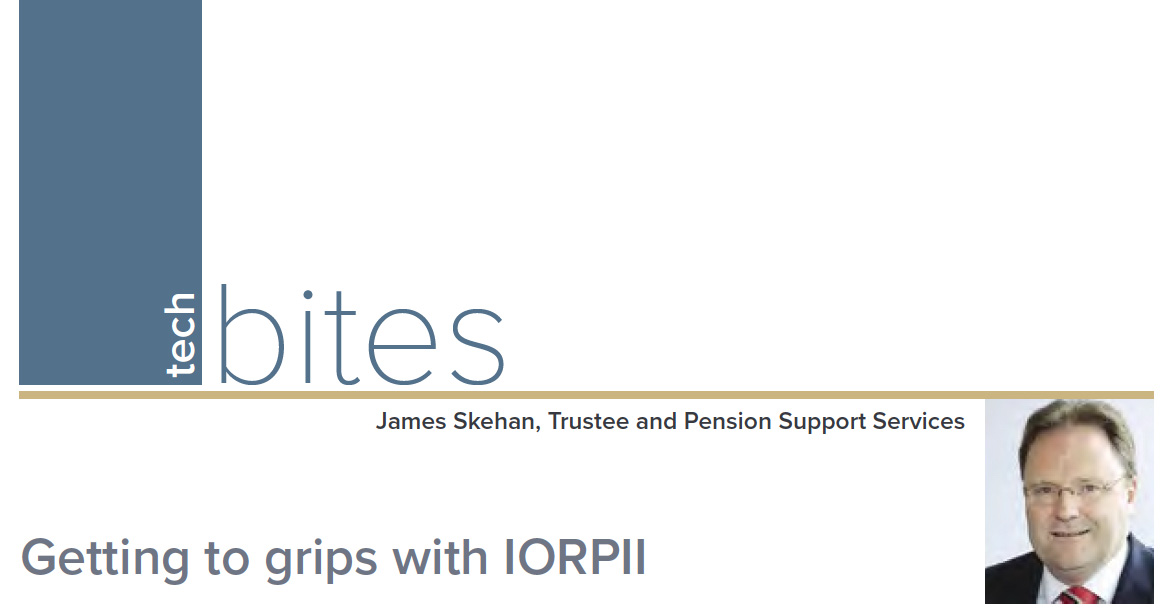 2021 saw a plethora of publications, primarily from the Pensions Authority as the framework under which pension schemes will have to operate became clearer. Following the transposition of IORPII into Irish law last April we have had the PA issue a summary of the IORP regulations in May, draft, and then final codes in November.

In addition, a guide for employers, when considering a move to a Master Trust and a Findings Report following their engagement with a range of stand-alone schemes and Master Trusts were published in December.

Review and Oversight The various publications in 2021 have outlined the new requirements and 2022 will need action to be taken by trustees, employers and their advisors to consider the implications of IORPII and to decide what steps need to be taken to remain compliant.

One of the main changes between the draft and final code of practice for trustees deals with the need to have a formal review process in place for both the administration and investment performance of the scheme.

Monitoring (quarterly) and review (annually) of both the administrator and the investment manager are still required but the three year “critical review” does not now require an automatic market review / tender process to be undertaken.

Employers will need to look to their Financial Broker to undertake this monitoring / review process to establish whether the administrator / investment manager should be retained or whether there is a need to implement a market review.

Initial Requirements The two initial requirements for trustees were to have a remuneration policy in place by the end of 2021 and to complete the first Annual Compliance Statement by 31st of January. The preparation of these documents by trustees has seen the first sign of additional fees being passed on to employers with fees of between €500 and €1500 being charged.

As other requirements such as the need to appoint a secretary to the trustees and Key Function Holders for risk management and internal audit are put in place the invoices being sent to employers will start to mount up and will prompt employers to seek advice on how to best to deal with the new requirements.

If a decision is made to move to a Master Trust it is important that employers shop around and choose a well-run Master Trust that offers value for money for their employees.

Master Trusts Apart from some very large schemes the only viable option for employers who want to continue with an occupational pension scheme would appear to be to wind up their scheme and enrol / join one of the Master Trusts that have been / are being established.

In recognition of this, the Pensions Authority published an “Employer Guide to DC Master Trusts” last December which listed a number of issues that employers should consider before moving to a Master Trust.

The issues raised by the PA include the qualifications of the Master Trust trustees, the capital adequacy of the Master Trust and how conflicts of interest have been dealt with. It is clear that employers will need support from their Financial Broker in considering these issues.

The Guide also highlights the need for value for money to be considered and how the different Master Trusts compare – highlighting the need for employers to engage their Financial Broker to conduct a full market review before selecting the most suitable Master Trust and not to simply gravitate to the Master Trust offered by the provider that administers the existing stand-alone scheme.

Engagement Programme The end of the year was a busy time for the Pensions Authority who also published their “Engagement Findings Report” in December. This forms part of their move to a forward-looking risk-based approach to supervision of pension schemes and the primary objective was to assess how schemes were starting to deal with the increased governance requirements of IORPII.

One of the key messages from the report is the need for trustees to have robust performance review structures and that providers should be replaced if warranted, even if this will involve some disruption.

Pension Simplification While all of the above will make the scenario for group pension schemes more complex, the Finance Act has begun the start of a welcome move to simplify the range of pension products and options that individuals and their advisors will have to deal with going forward.

One of the main changes is the removal of the need for retirees to invest in an AMRF and the automatic conversion of existing AMRFs to ARFs. This change will simplify the options that individuals and their advisors will have to deal with and will allow those with small retirement funds to access more of their money than the previous rule which limited the access to 4% of the fund value each year until they reached age 75 – or met the minimum income requirement.

The removal of the 15 year rule that blocked a transfer to a PRSA provides more flexibility to individuals but unfortunately the hoped for removal of the need for a Certificate of Benefit Comparison to obtained wasn’t included in the Act. Another welcome change means that where the maximum lump sum death benefit has been exceeded the excess can now be invested in an ARF rather than having to be used to purchase a pension for a dependent of the deceased.

It is hoped that further steps will be taken to simplify the pension landscape in the not too distant future.