BIPAR represents the interests of insurance and financial intermediaries with the European authorities through its 47 national associations in 30 countries. Even though every national market indeed has its own specificities, we all share the same core values and interests.

Nic tell us a little about BIPAR and indeed its links to Ireland?

BIPAR represents the interests of insurance and financial intermediaries with the European authorities through its 47 national associations in 30 countries. Even though every national market indeed has its own specificities, we all share the same core values and interests. Via all its national associations we have a European single voice of around 800,000 small, SMEs and large insurance and financial intermediaries with European institutions.

There is literally an insurance intermediary in virtually every city, district, and town in the EU and that gives BIPAR through its member associations tremendous reach and credibility. All those intermediaries operate in a highly regulated environment where EU legislation or regulation is the basis for that legislation/regulation. BIPAR is historically the acronym of Bureau International des Producteurs d’Assurance et de Reassurance.

BIPAR, is well established through the European institutions and is understood to be the European Federation of Insurance and Financial intermediaries. BIPAR was set up in Paris in 1937 and maintained a secretariat there until 1989 when it was transferred to Brussels as the EC became the EU. It is great to have the focus on BIPAR in the Irish Broker magazine because Brokers Ireland’s permanent team and various members of Brokers Ireland are very active contributors to our work at European level and this is an occasion to thank Brokers Ireland’s leaders for the great cooperation over past decades.

Brokers Ireland’s CEO and team members and members such as Lorraine Cooke and Paul Carty are also very active in our BIPAR committees and working parties in relation to issues such as the EU retail investment strategy, financial education, sustainable finance, digital resilience, robo-advice, credit, pensions, anti-money laundering and much more.

Another be it more indirect link we have with Ireland at BIPAR is that most of the current EU dossiers on our BIPAR agenda are initiated and under the responsibility of Mairead McGuinness, Commissioner for Financial Services, Financial Stability, and Capital Markets Union.

How is BIPAR organised and resourced?

As I said earlier, BIPAR has a permanent secretariat in Brussels with a highly competent team of professionals that handle the individual dossiers and that liaise closely with member associations. Like most bodies we have a Management Board, Standing Committees such as “Brokers”, “Agents” “Directors Committee” and “EU Affairs” and in addition a significant number of Working Groups which address specific issues.

We hold regular meetings of the committees and in addition, we have traditionally held a mid-term and Annual General Meeting for members which, in recent years have experienced the Covid hiatus which has led us like so many others to having meetings on-line via technology which has worked – but it’s time to get back to face to face meetings. Apart from the human resources which BIPAR can call upon, we have the resources to use external support such as consultants or lawyers when appropriate.

We are obviously also in contact with other sector federations, academics, trade unions and European consumer organisations and BIPAR is a member of the World federation of Insurance intermediaries. BIPAR monitors the activities of these bodies and intervenes whenever necessary to promote and defend the legitimate interests of intermediaries. In this respect, BIPAR, with its permanent structure based in Brussels employing 7 persons under which 4 legal and European policy experts, has over the years proved to be an efficient and effective platform to develop co-ordinated actions in the interest of the European community of intermediaries. BIPAR is somehow the intermediary between the European institutions and the sector.

One of the key activities of BIPAR is therefore to facilitate exchange of information between the institutions and the market in an objective way. It is important for BIPAR to explain to the EU legislators (Commission, European Parliament and Council) and EU supervisors what the practices and the developments in our sector are, as well as the needs for intervention (or non-intervention) in order to prosper and move forward.

Depending on the needs of the sector, BIPAR organises meetings with experts of our sector with the abovementioned decision makers, to give them technical information or know-how (committees, working parties, mid-term meetings and annual meetings).

During the Covid crisis, all this took another format, but the basic working values remained in place and we were able to organise every month a webinar between our members and one of the major decision makers at EU level. 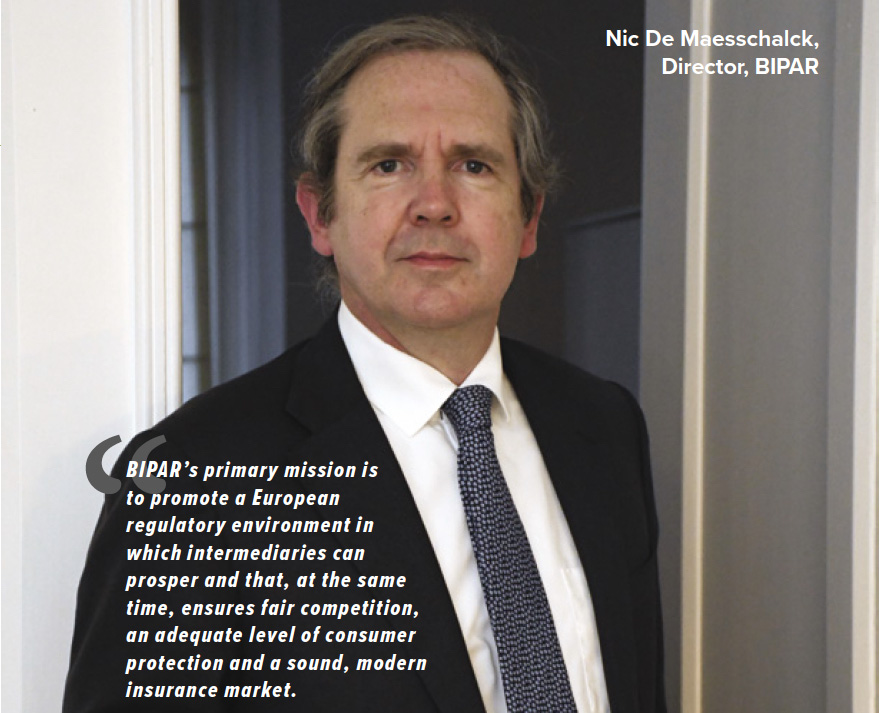 For example, one of the webinars was with Commissioner McGuinness. These were always great opportunities to keep in touch and to exchange information about the most recent developments.

Also, with our members we had weekly meetings using the zoom and between the BIPAR team we obviously continued to discuss daily. In the end, it is however always the European democratic system – sometimes seen as “heavy” – that decides. One should also not forget that the Member States also play an important role in this European democratic process.

It is also important that the BIPAR national member associations engage in a constructive dialogue with their national decision makers both at national government but also at European parliament level so that they subsequently convey their message to the EU. Brokers Ireland is in this respect a real champion.

BIPAR’s primary mission is to promote a European regulatory environment in which intermediaries can prosper and that, at the same time, ensures fair competition, an adequate level of consumer protection and a sound, modern insurance market. In this respect, from an insurance and financial intermediaries’ perspective, the current European agenda includes 3 flagship initiatives which are of strategic importance for the future of our sector:

These three flagship initiatives have the intention to deal with what is considered by European national governments and politicians as main societal and economic challenges for the EU. 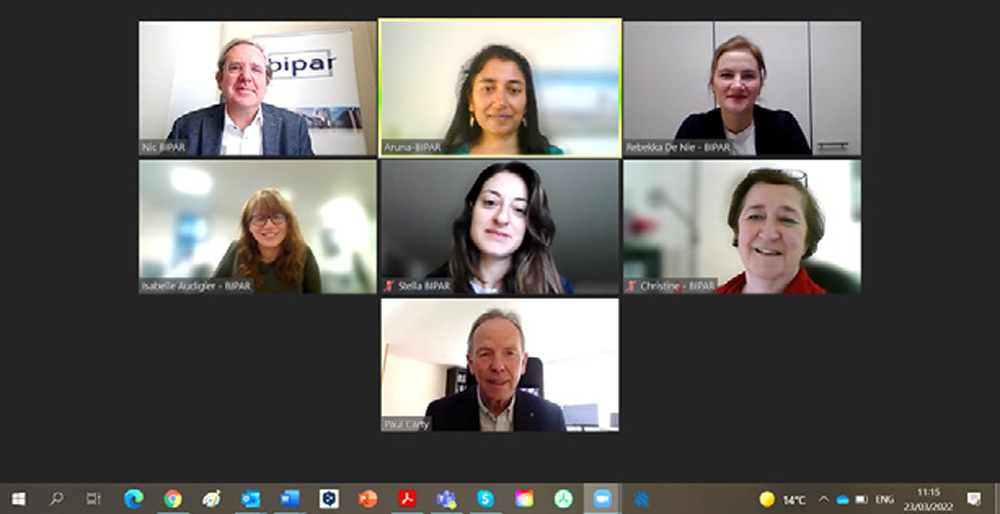 The BIPAR team in videomeeting with Paul Carty, Chair of the BIPAR EU Affairs Committee

Adapting the rules in the framework of the digital, ecological and ageing population trends seems a logical and straightforward process. The three themes need however to be included into existing rules and the devil may be in the detail. BIPAR and its national associations have over the last 18 months been invited to answer literally to thousands of pages of consultation papers with ideas, opinions, analysis ,suggestions and impact assessments.

We have been invited (and continue ) to participate in panels and workshops to share our ideas and opinions on how, for example, to ensure that people who invest understand better in what they invest. In the framework of the digitalisation, we have introduced the now widely used concept of the “hybrid intermediary”: the intermediary who combines the best of digital with the best of human as a mix when serving a client.

This has helped amongst others to avoid that the design of new rules would be entirely calibrated with pure digital operations putting a burden on existing “hybrid” intermediaries. But according to BIPAR, rules should be of such a quality that they do not need to be changed every 5 years. We believe regulatory stability is necessary. Most of the flagship objectives can be achieved with the existing IDD regulatory framework.

When we look today at a sentence in the national legislation, that sentence is the result of a permanent interaction and debate that is taking place at national, European and international level and which interact continuously with one another.

BIPAR has managed to forge a consensus on the key issues with our member associations which enable us to speak with one voice. I cannot overemphasise the importance of this when dealing with the EU institutions which gives us respect because we are able to provide clear representation on the key matters.

Over the last few years you have, I know, in Ireland a debate about remuneration with your government and supervisors. This debate is also taking place in other Member States and at EU level in the context of CMU/ Retail investment strategy and also internationally. At BIPAR we believe the most efficient way forward, in the interest of the economy, the consumer and our sector is transparent choice between business and remuneration models.

What do you see as BIPAR’s greatest achievement on behalf of insurance intermediaries in Europe.

I’m very clear in my views of BIPAR’s greatest achievement – in my view there are two! BIPAR has managed to forge a consensus on the key issues with our member associations which enable us to speak with one voice. I cannot overemphasise the importance of this when dealing with the EU institutions which gives us respect because we are able to provide clear representation on the key matters.

The second is that BIPAR (yes that acronym again) is recognised and respected by all and that means that the voices of insurance and financial intermediaries is heard at every forum where matters of interest to us are discussed. The intermediation sector in the EU is a modern sector that brings value for money to all. In this respect a national association and thus also a european federation is a reflection of its members.